Home » Austria » Christmas in Austria: The Return of Krampus

A rosy-cheeked jolly old man, parades, presents waiting to be unwrapped and love in everyone’s heart. That is exactly what we experience every holiday season in the USA. But when you move to another country, you never know what to expect. 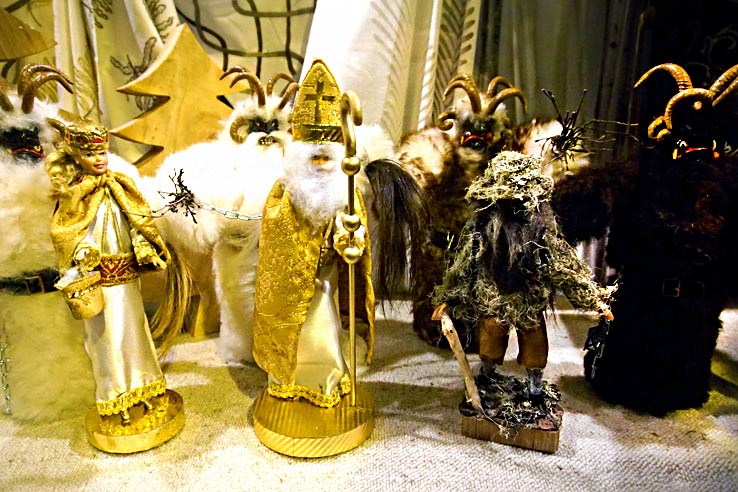 Now, don’t get me wrong, Salzburg is a Christmas lover’s paradise. Aside from hosting one of the most incredible Christmas markets in the world, the entire city is filled with the joy of the season. It all seemed to be pretty similar to that holiday feeling we’re used to… 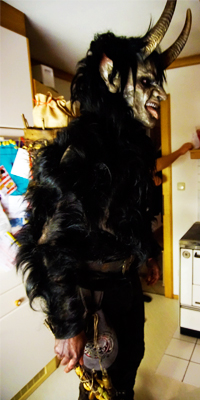 There are certain traditions you’ll come across while living abroad that will completely catch you off guard. How could something so polar opposite from what you’re used to be so normal in your new home?

Living in Austria has exposed us to one of those incredibly foreign traditions.

When you behave poorly in the USA, Santa just might bring you coal. Well, in Austria, when you’re bad, your childhood fears come to life in the form of the “shadow” of St. Nick – Krampus.

For all the bad little children, on December 5th, their destiny is chosen. Were they good and can finally breathe a sigh of relief? Or were they bad…?

If they were bad, an evil monster arrives at their door. A monster with giant horns, a HUGE hairy body, big mean eyes and teeth so sharp, they look as though they can pierce right through you. Half goat, half beast. His chains can be heard clanking against the pavement as he walks up the stairs. 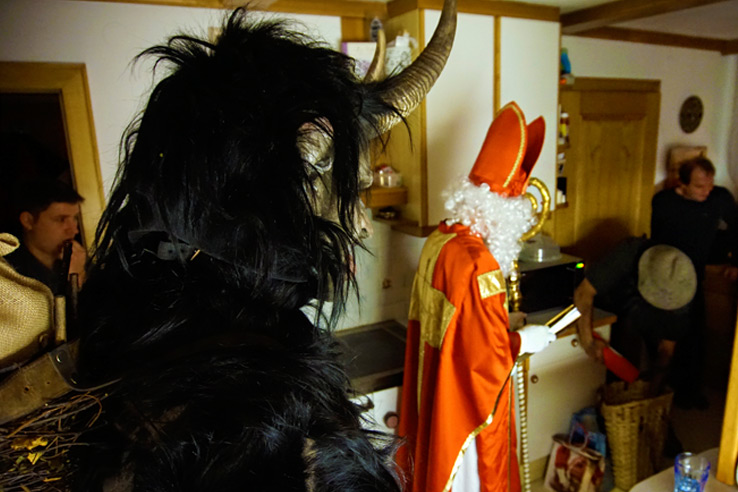 They were bad. Now Krampus is coming. And  they will be punished for their bad behavior. If that doesn’t persuade children to be good, I am not sure what will!

Not only is December 5th a day that children fear, throughout the end of November and early December, every village hosts a “Krampuslauf.” 20 to 40 Krampus groups walk through the streets with one goal: To terrify every person in attendance.

They parade around, climbing on the fences that protect you, waving around their WHIPS and whipping anyone that gets in their way. If you leave the protection of the fence, Krampus has every right to do what he wants… 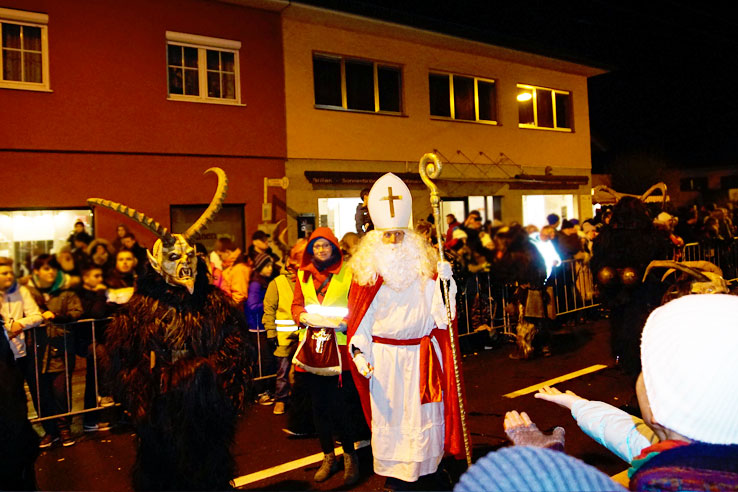 Teenage boys & girls – forget it. Grown adults – better stay alert. Ask to take a picture, make eye contact or taunt Krampus and you are done for.

After we heard of this crazy tradition, we knew we had to be a part of it. 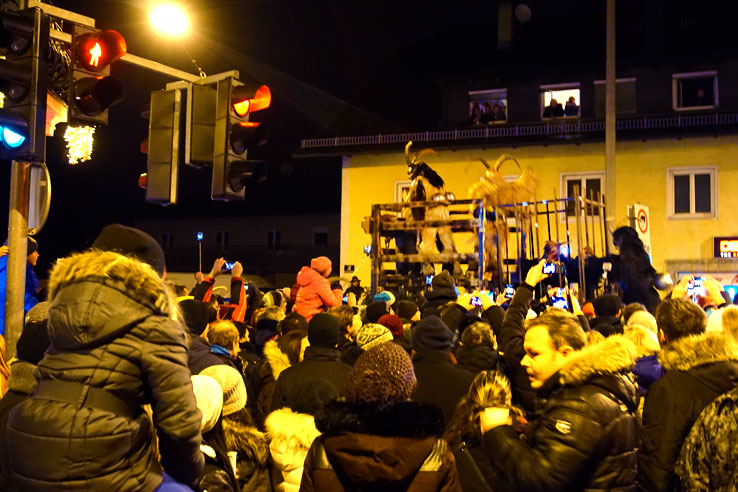 Did Austrians really celebrate like this or were our friends exaggerating? No one actually gets whipped, right? In the USA, lawsuits surely would follow. Wouldn’t it be the same here…?

Soon after we arrived at our first Krampuslauf, we were proved wrong. VERY WRONG!

Hundreds of children, teens and adults lined the fence bordering the Krampus“parade route”. Gluhwein and Stiegl sold at multiple stands with Austrian classics to munch on – Leberkase, Goulash, Brats. Drinking and eating, waiting for Krampus to arrive. Then all of a sudden you could hear them…

Their chains collide with the pavement in a loud and steady beat. They march all together, making the sound very distinct. And they do not waste a second. Lights, smoke machines, death metal music, as they search the crowd for their next victim. Their masks are so incredibly detailed and frightening. They seem like real monsters. Even I shuddered at the site of them! 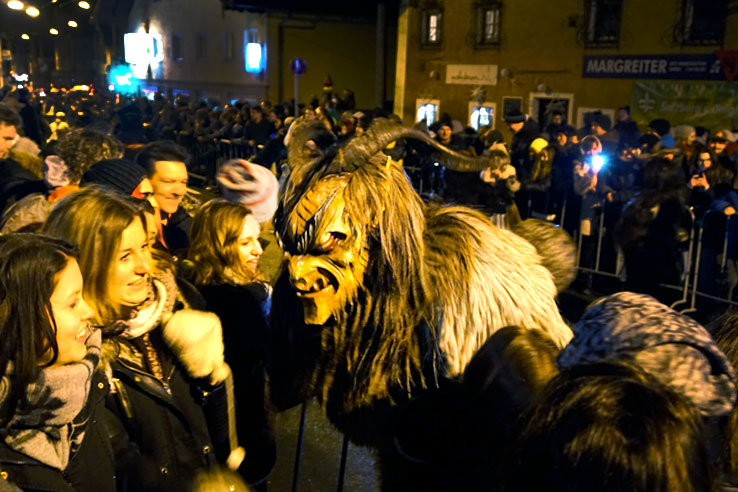 But despite my fear, I was determined to get a picture. So I asked. (Big mistake!)

As I asked, 3 Krampuses gathered and started whipping my legs. It hurt SO bad. I told them to stop, but that did nothing. Finally, they moved on. My legs were stinging like crazy. Luckily, I did manage to get a picture with one of the nicer ones. He still whipped me after, but not as forcefully as those before him. 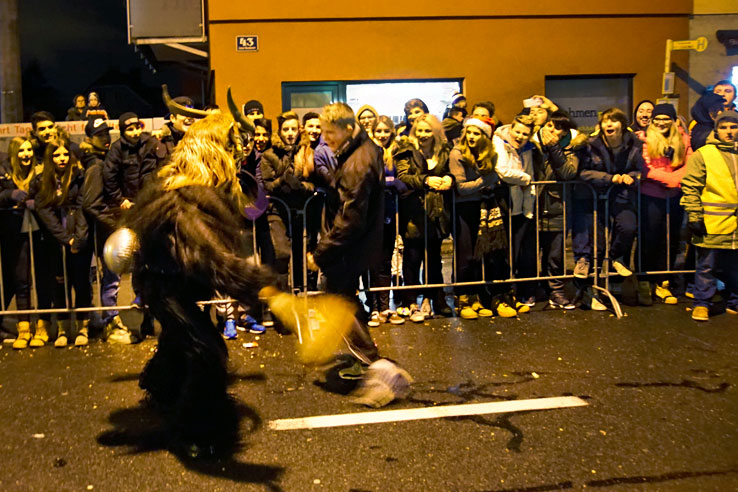 What a wild experience! The rest of the night we sipped on warm Gluhwein, watched the rest of Krampuslauf, and laughed about my traumatic experience.

Sure I had some battle wounds on my legs, but Krampuslauf was one of the most memorable experiences that we’ve had in Austria. Putting yourself out there and truly embracing something totally and completely different than what you’re used to is a thrill. 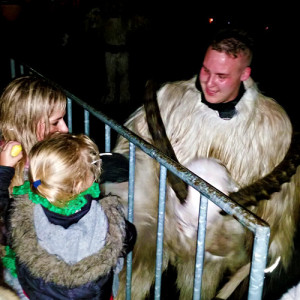 And as silly as it sounds, getting whipped by Krampus right along with the other locals made Austria feel that much closer to becoming a home.

Till next year, Krampus!