Who knew that after only a few hours at Bavaria Film Studios, we’d live out our greatest childhood dream…

The NeverEnding Story. A movie that inspired imagination, wonder and adventure to every child of the 80s and 90s. Through the adventures of Bastian and Atreyu, their encounters with magical creatures like Morla the Ancient One and the Rock Biter. And the most loveable sidekick of all time, Falkor. We learn the true power and importance of imagination. 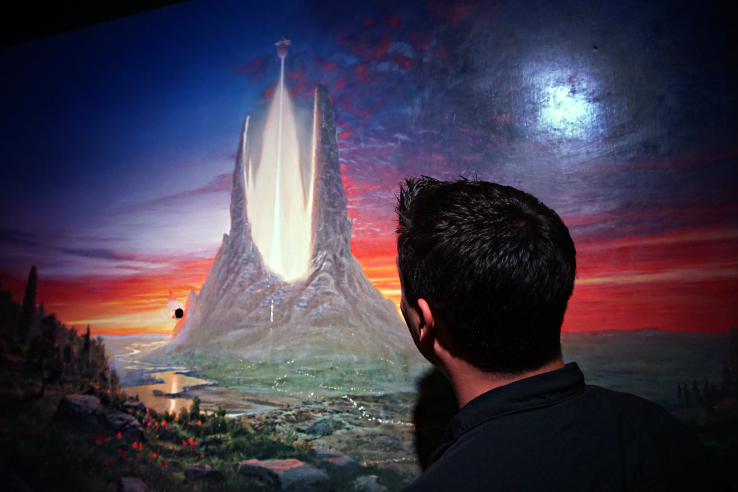 But did you know that ALL this magic was created right outside of Munich at Bavaria Film in Grunwald? And that you can tour their film studios? And RIDE the REAL FALKOR?

We had a Dream…

I know we are not alone when we say that our childhood dream (and probably every other adult our age) is to ride Falkor through the sky to the tune of NeverEnding Story. To feel like we’re Bastian or Atreyu, saving Fantasia from The Nothing.

NEVER did I think that this dream could become a reality. But when we heard that the NeverEnding Story props are displayed at the film studio where it was created, including Falkor himself, we knew we HAD to embark on a journey from Salzburg to Grunwald. We HAD to see it for ourselves. 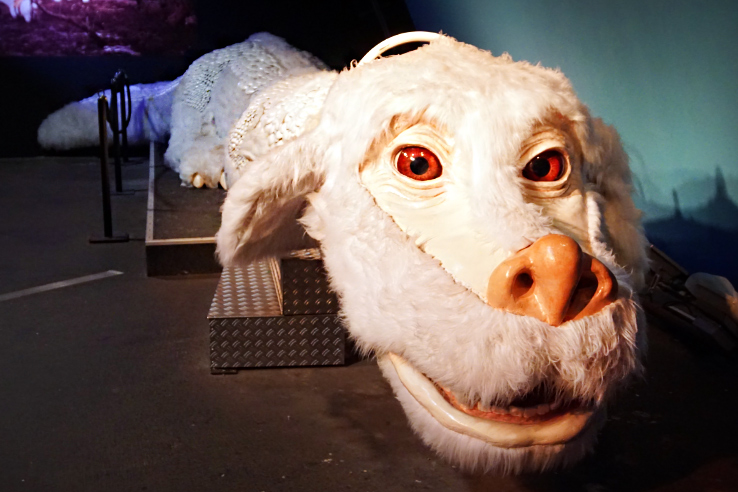 After all, this would literally be a dream come true – for both of us!

Off to Fantasia We Go!

We made our trip to Bavaria Film part of Erin’s 32nd Birthday celebration. Because what better way to celebrate another year older than taking it back to your childhood days? 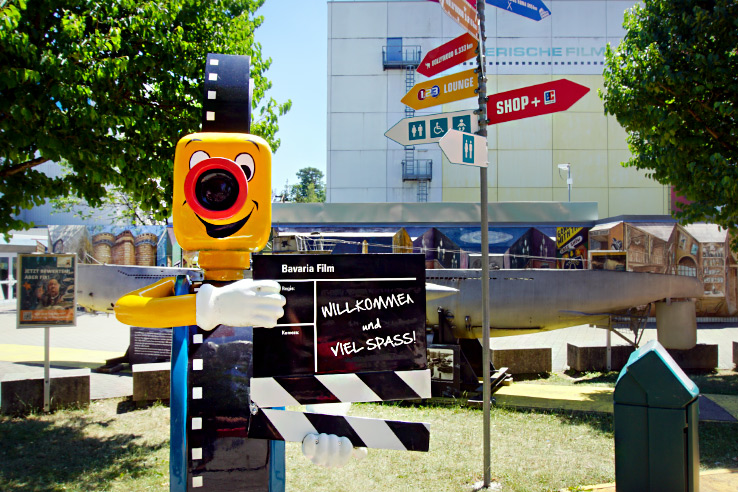 The film studio is only about a 2-hour drive from where we live in Salzburg and it’s a straight shot off the highway. We’d done our research and knew the English tour would take place at 1 pm. So we departed in true timely 32-year old fashion, arrived promptly, purchased tickets in minutes and were ready to go well before our tour. 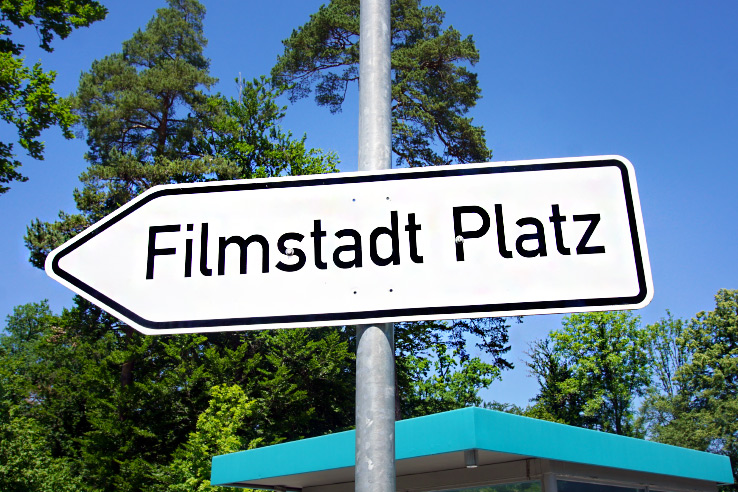 To pass the time, on the property there’s an old school McDonalds. Sometimes those arches just call your name, so we figured why not?! We purchased a few cheeseburgers and a refreshing Mojito Lemonade and enjoyed being served outdoors (yup!) at McDonald’s.

Then we took in the sites in the main courtyard. Sites like ROCK BITER – AH!! – and the Racing Snail from The NeverEnding Story. 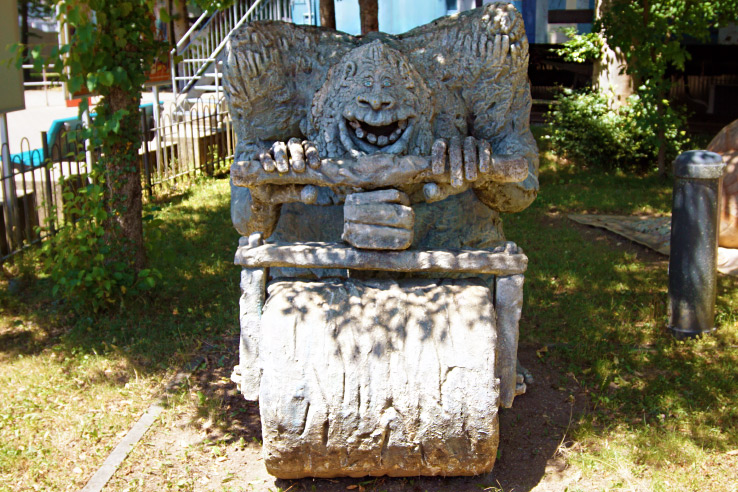 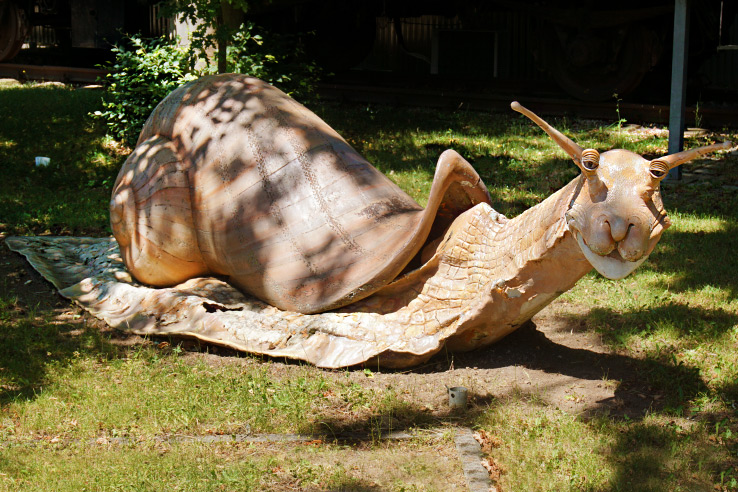 We also read about some of the other films, like Das Boot – the most famous German movie of all time.

And although we were pumped to learn SO much about the German film industry, we really couldn’t stop thinking about our friend, Falkor.

Lucky for us, we were the ONLY people there for the English tour, so we got the full VIP, private experience.

Our tour guide, like many of the other employees at Bavaria Film, is an actor. As you can imagine, he was well-informed, spoke perfect and clear English and had a true passion for film. He kept the momentum and excitement going the entire time we were on tour. 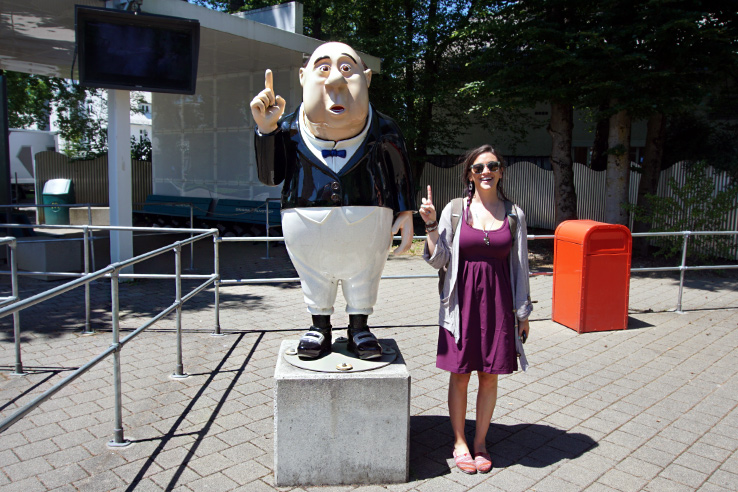 We started with a few films that we hadn’t heard of, but are famous films produced here at the studio.

Between touring Air Force One, the inside of a ‘palace’, a Gaelic settlement, a Viking village, we were in complete awe of the true magic that cameras can create. It’s just amazing to see all the work and all the detail that goes into what we watch on the big screen. 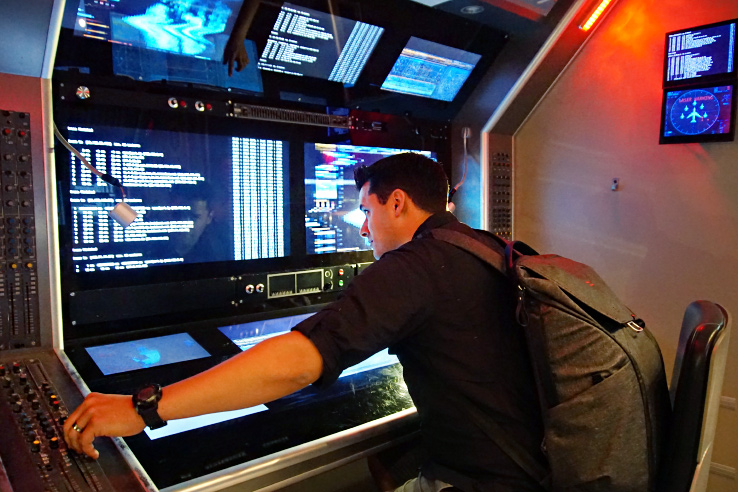 Das Boot was one of the coolest displays we encountered during our visit. This film is the most successful German film of all time, was nominated for a number of awards and they are very proud of its success. 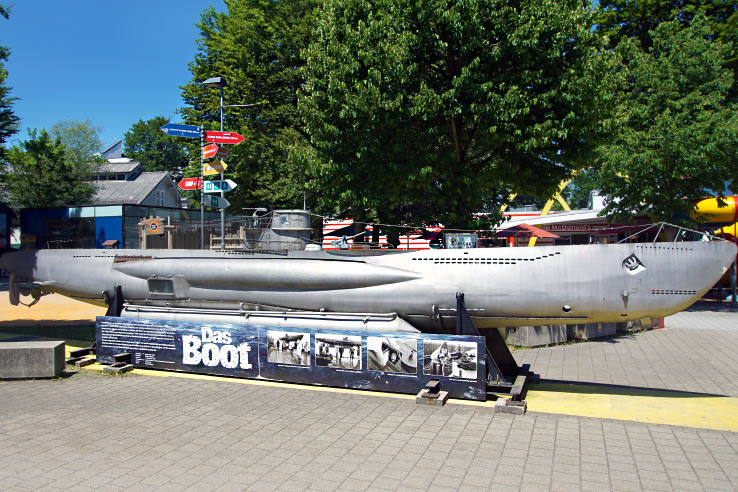 The movie is based on the novel by Lothar-Günther Buchheim and documents the story of a U-Boat crew during WWII.

At the studio, you can explore the interior of the submarine set! Like literally the life-size, real-deal set that was used for filming scenes inside the submarine.

It really is incredible how so instantly when you walk into the set, you’re in an entirely different world. It was amazing. The entire submarine is so real looking. 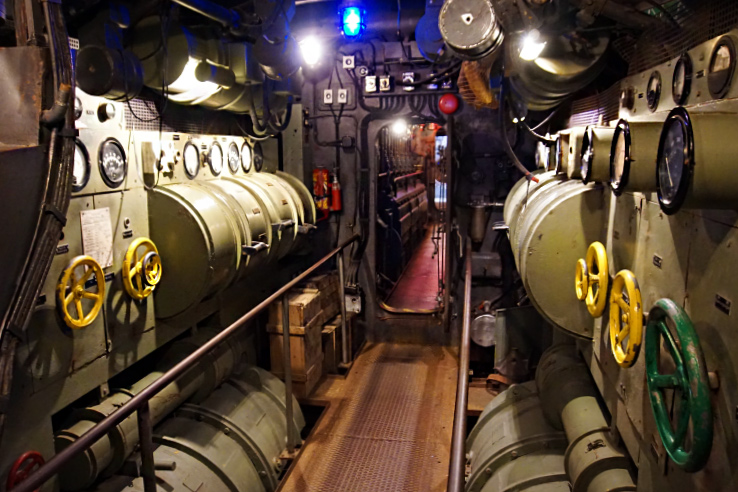 There are sleeping quarters, control rooms, communal space, weapons storage. You can feel exactly what those crew members felt and the incredible close conditions that the actors worked in, recreating the real life situation.

Throughout the tour, you can also show off your acting skills!

In a few of the studios, they have Green Screens set up and you can act out scenes on the big screen – WITH visual effects. They even record your performance so you can buy the recordings at the end of the tour. 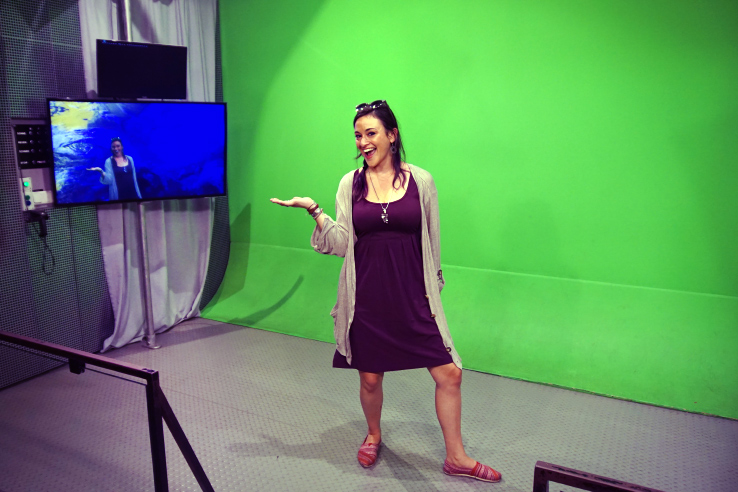 We were chased by Dragons, gave the weather report in the newsroom AND chased a ‘moving’ train. Each set up is meant to show you how films were made and how the magic comes alive on screen. We seriously had such a blast being actors for the day in ALL 3 of these situations. 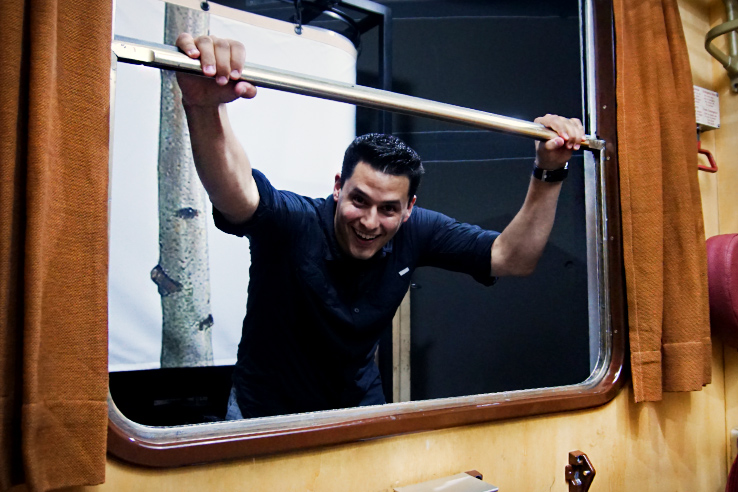 This was the moment we had been waiting for all day (slash our whole lives!). We walked into a room and immediately jumped with anticipation. It was Falkor himself. Right there. The real deal. Waiting for us to sit on him for a ride through Fantasia!

We couldn’t believe our eyes. The studio restores Falkor every 2 months or so, just so that visitors can ride him in all his glory. It really is amazing that something so iconic can be enjoyed so interactively.

Instantly, we ran up to Falkor and sat on him, just like 2 little kids living out their biggest dream. 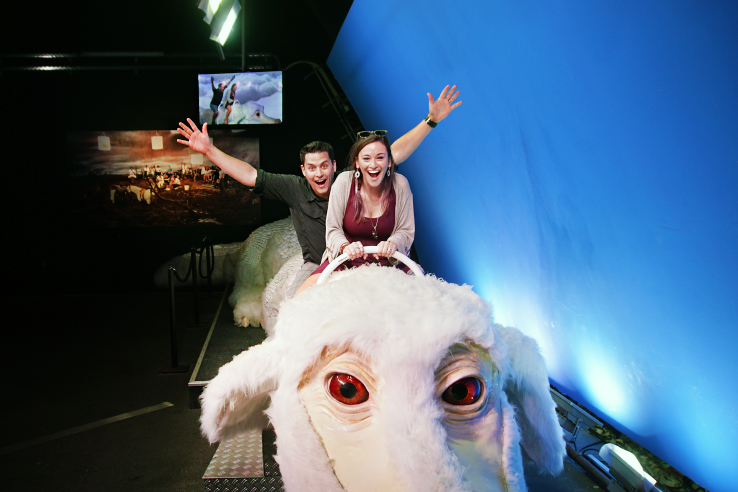 And THEN the music started…

That was it. This was officially the best feeling of all time.

NeverEnding Story was playing, we were sitting on Falkor AND the skies and clouds were projected onto a Blue Screen next to us. It looked (and felt) just like we were soaring through the sky! 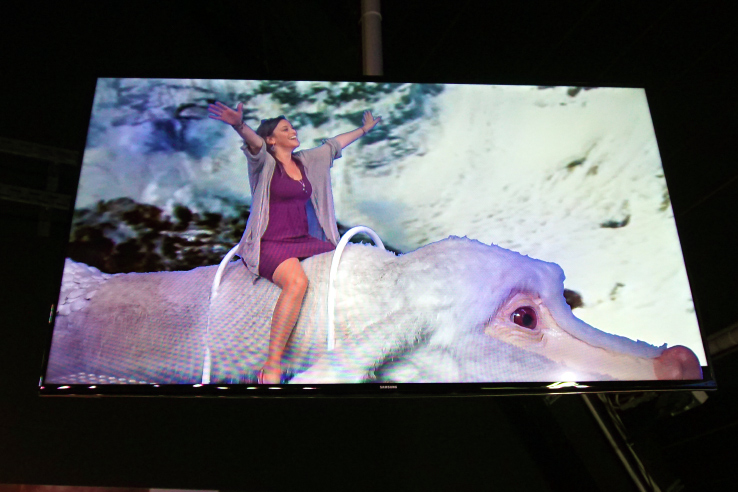 But it gets better.

At The NeverEnding Story display, not only do they have Falkor, they have behind the scenes pictures hanging on the wall. Including the scene where Artex is lost in the swamp (aka the pool, inside the studio, filled with mud, as we learned from our tour!) 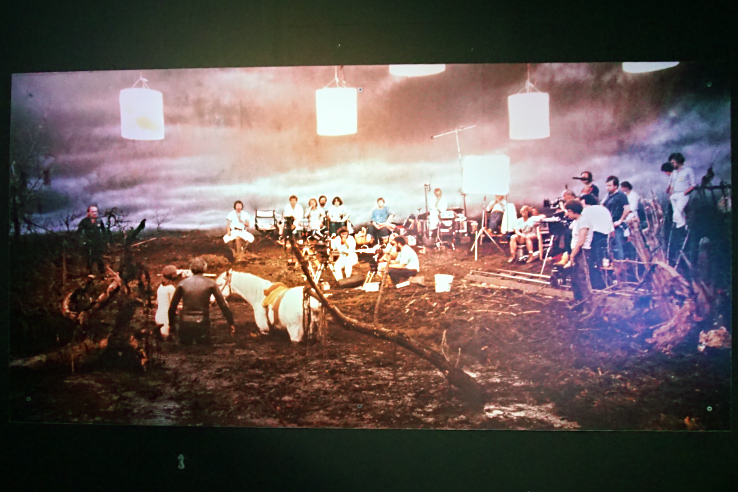 The Sphinx, laser-shooting gate is on display (which is actually 2 small statues that the camera tricked you into thinking were massive.)

AND you can see the famous view of Fantasia where the Empress lives, which is actually just a PAINTING that they filmed on camera! Insane! 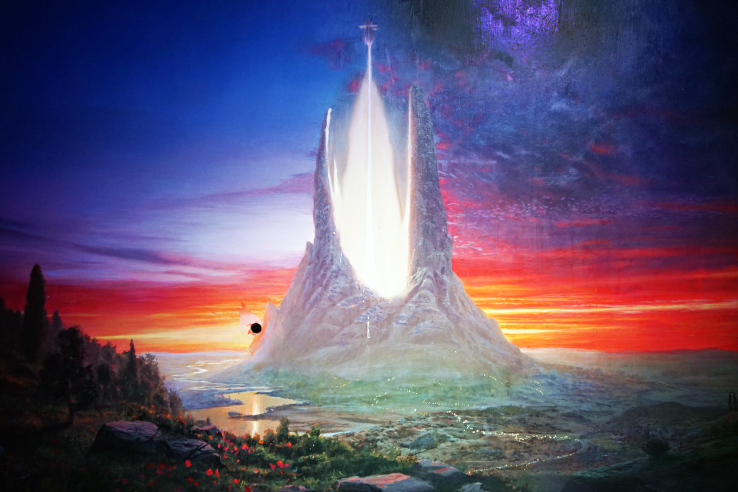 What they can do on screen and how they can trick your eyes is truly incredible, and that was back in the 80s!

Details and Tips for YOUR visit

The entire visit to Bavaria Filmstadt takes 2ish hours, depending on how quickly you move through the studios and, of course, how long you plan to spend in the gift shop. There are also restaurants on site that you can enjoy before or after your tour.

They offer tours in German and English, but be sure to check their site for timing before you go, especially for the English tours. They are not automatically all day long and usually have specific times.

Well, other than this moment being priceless…

There are a few ticket options:

What is Bullyversum, you’re wondering? Well, this is a place to visit if you are particularly interested in German parody movies. But everything here in German, so know that before you commit.

Or the Complete Package – ALL attractions for 27.50 euro

Getting to Bavaria Film 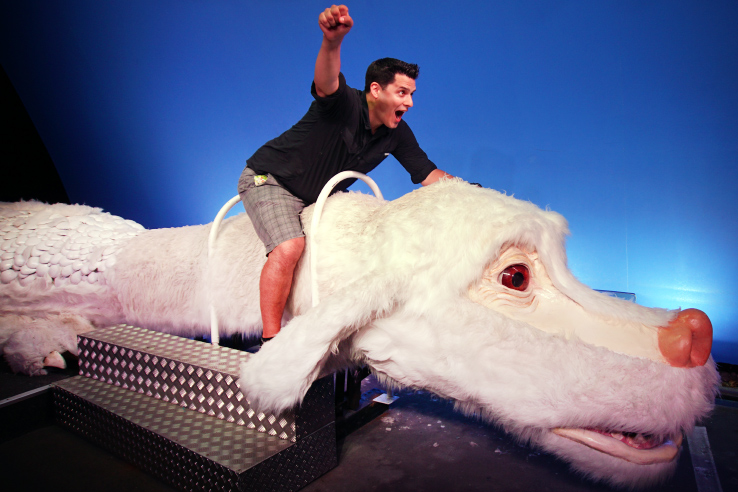 The studio is located in Grunwald Germany, about 20 minutes from Munich and an hour and 45 minutes from Salzburg by car.

You can also use public transportation from Munich, which takes about 40 minutes total and requires a transfer or 2, depending on your timing.

Take the cable car line 25 to Grünwald, exit at Bavariafilmplatz. From the station, it is a 10-minute walk. You can use the MVV-journey planner online, to get the timing down.

We were extremely satisfied with our entire day at the Bavaria Film Studios.

From the second we got there until the minute we left, we were ALL smiles. Not only because of The NeverEnding Story and Falkor, but because it was fascinating to see the ‘behind the scenes’ and learn the brilliance and creativity that goes into making films. 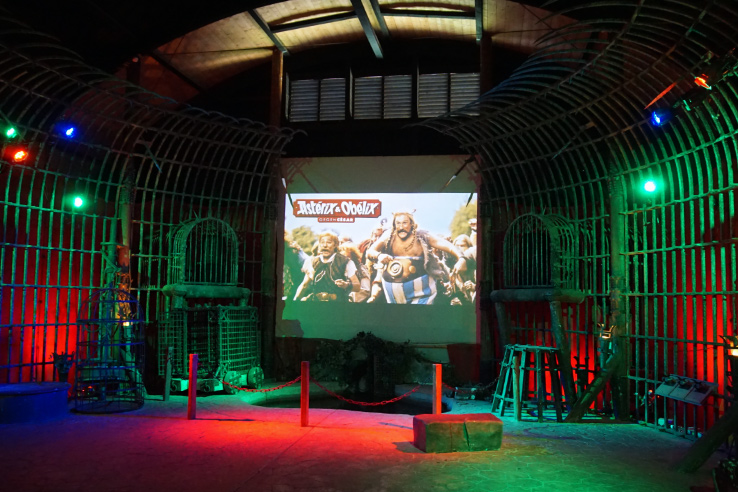 Our visit was interactive, informative and simply good old-fashioned fun. To top it off, the staff was superb – well-informed, friendly and accommodating.

We now know that the Bavaria Film studio is a place ‘The Nothing’ could NEVER destroy. For it embodies all that we learned from The NeverEnding Story:

Imagination is a powerful thing. With it, we can perform miracles. 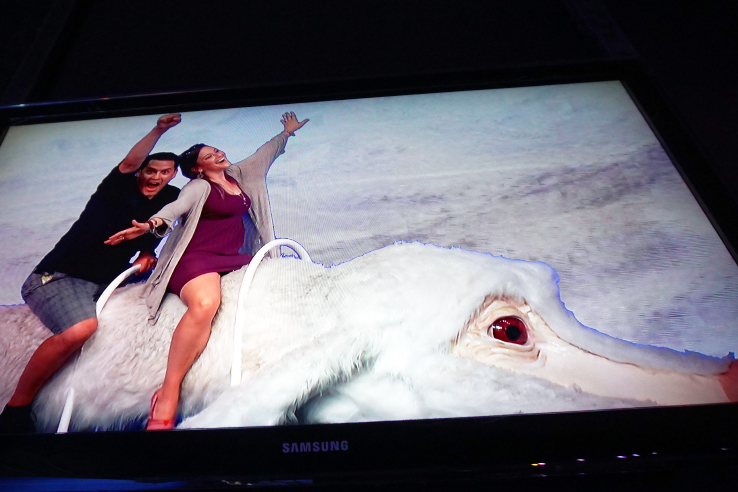 Experience what we experienced at Bavaria Film…through Snapchat!