So the time had come. FINALLY, we were getting off our lazy butts this winter to go skiing at Kitzbuhel in Austria. Last year (2016), we bought used skis and planned to tear up the trails, basically becoming professionals in the 2017 ski season. I mean, that’s the Austrian way, right?!

But it was already late January and we had yet to hit the slopes. Too busy, too exhausted, too much going on. Blah, blah, blah. Whatever the excuse was, we were excited to have finally made time for a day of fresh air and fresh powder. And to spend the day in one of the most famous ski resorts in the world – Kitzbuhel! 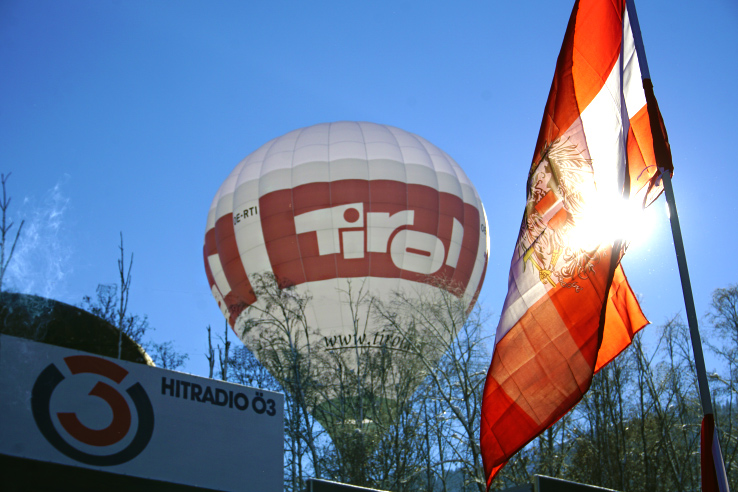 A journey to the Alps.

We set our alarms for 6 am. Kitzbuhel is a 1 and ½ hour drive from Salzburg, and we wanted to get a full day’s worth of skiing in.

You can also get to Kitzbuhel via train. The train station or Bahnhof Kitzbühel is right at the slopes, making it super easy to navigate from Austria or internationally.

It’s always a struggle to get out of bed that early in general and with my first day of the year skiing jitters, I can’t say I was doing so with eagerness. I LOVE skiing, especially in Austria, but I am no expert, so it’s always a little nerve-wracking when the season begins.

But never-the-less, we made it out the door at a normal time, stopped to grab a quick breakfast on the way and headed towards the slopes. The drive was absolutely perfect, just like every drive in Austria. 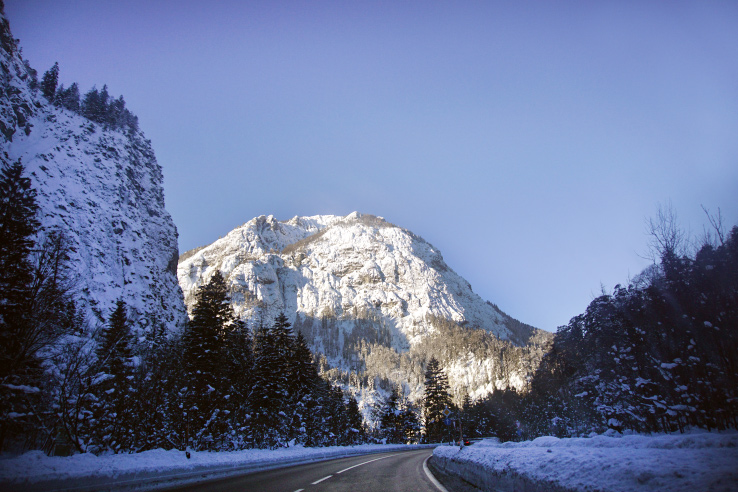 Snow-covered mountains, quaint little villages with their majestic church in the center. 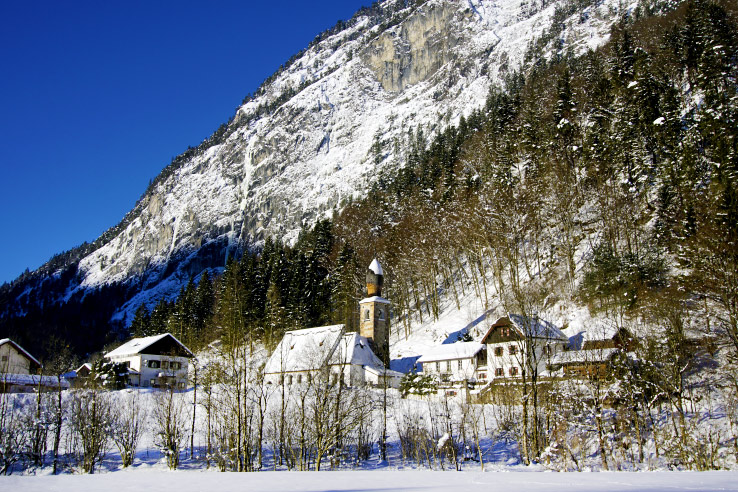 We always struggle between focusing on the actual driving and taking pictures of all the insane scenery we’re driving through. The way the sun shines on the mountains, the frozen streams between 2 epic peaks, the trees that are completely frozen in time. 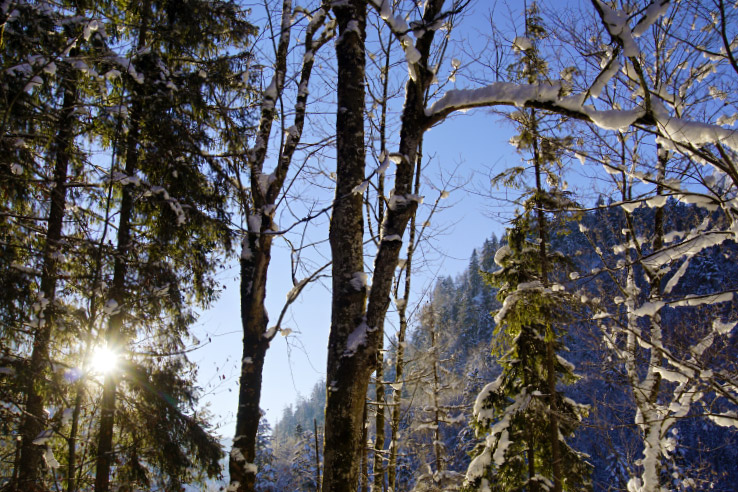 With our rough German skills, we heard the policeman ask, “Are you here for the race?”

“Sprechen sie English?” (usually one of our very first questions). He said yes (thank goodness) and we explained we were coming to Kitzbuhel to ski for the day.

He then proceeded to tell us there was a race going on and wished us luck as we moved forward to try and find parking. Even though we were a tad bit confused, we proceeded.

Then we made it to the village to what looked like a parking lot, found a spot, by some sort of miracle and parked. When we walked out of the car to get our bearings, we saw colors stream across the sky, trick-planes flying and hot air balloons floating… 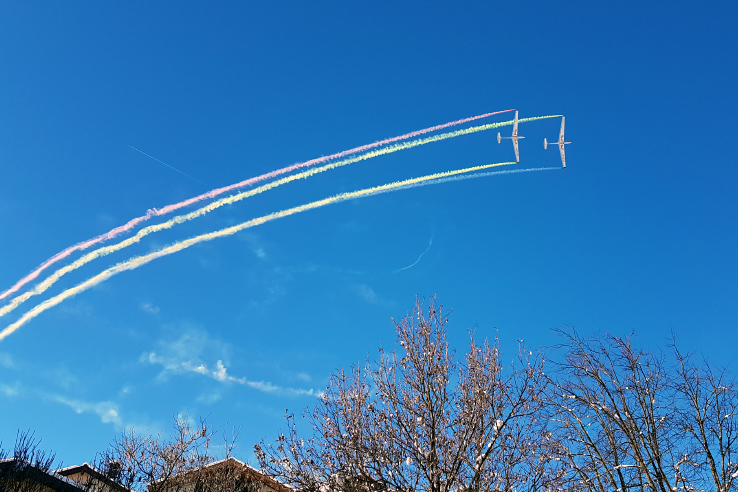 This was definitely something big…

Now, do we ski or do we say screw it and go watch the race?

Well, since we are all about spontaneity and living in the moment (hence us moving to Austria in the first place), we decided it was DEFINITELY race time. 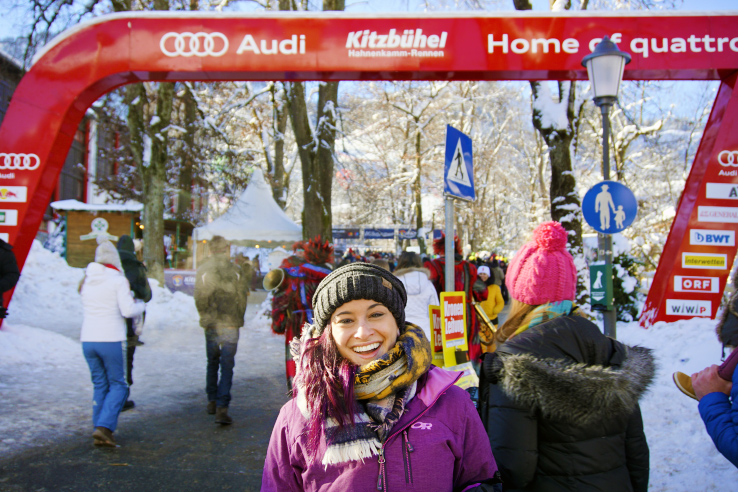 We threw our skis back in the car and walked right over to the ticket booth. Tickets were only 30 euros each and the race started in 10 minutes. Talk about PERFECT timing.

I guess some things are just meant to be…

As soon as we saw what we were walking into we got SO excited. There were flags from all over the world waving, people dressed to represent their country. A HUGE VIP section, people standing next to the track and people who skied and stopped on the mountain just to watch the race. It was a scene, unlike anything we’ve experienced before. 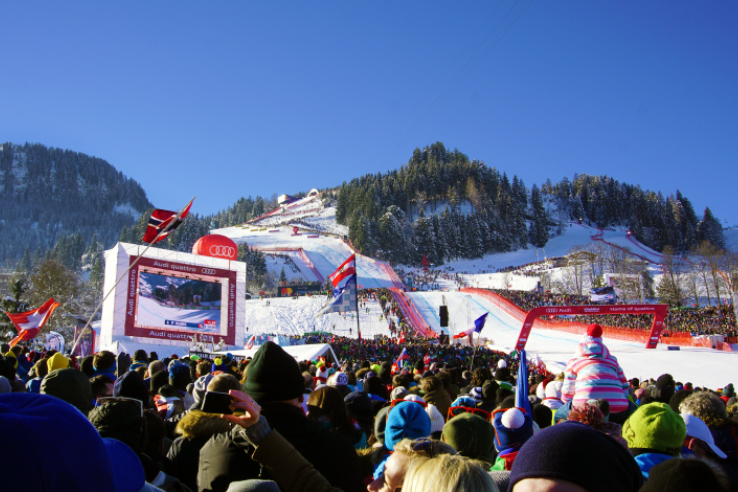 Watching a professional ski race was something on the bucket list for both of us and we just walked right into it! Come to find out, this was not just a race, this was the WORLD CUP! Hahnenkamm World Cup Race to be exact and it was a huge deal.

Switzerland, Canada, Austria, Germany, France, Italy, even USA! We watched each and every skier race down what seemed to be an impossible track. There’s something really cool about seeing country flags being waived for their respective athletes.

And people were definitely partying. It seemed like one giant party on a ski slope and that’s something neither of us had been a part of before.

Then Arnold Schwarzenegger came on the jumbotron and we started cracking up. Austrians kind of make fun of him since that’s all most Americans know about Austria. We thought it was pretty hilarious to see our fellow American and heard all the people around us reacting the same way. All part of the fun at the slopes!

After a seriously exciting race, we headed out into the streets – for the real party! 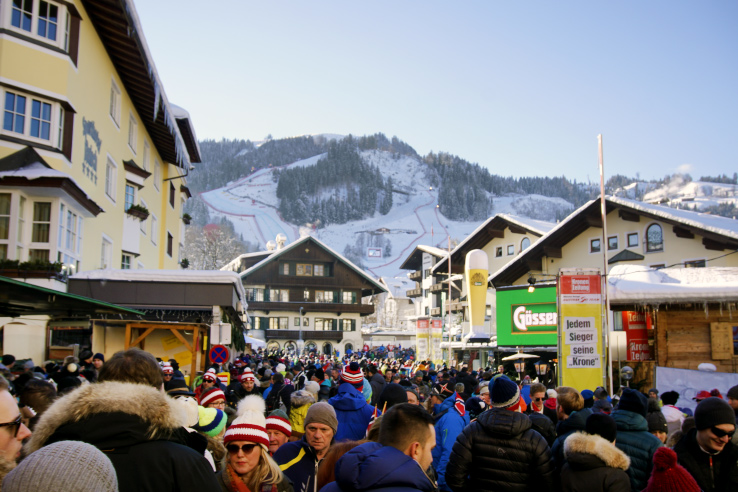 After the race, it’s the after Party…

What a celebration! Music, food, beer and gluhwein stations. People getting wild and enjoying themselves in the medieval Austrian village of Kitzbuhel. So, of course, we jumped right in, ski clothes and all! 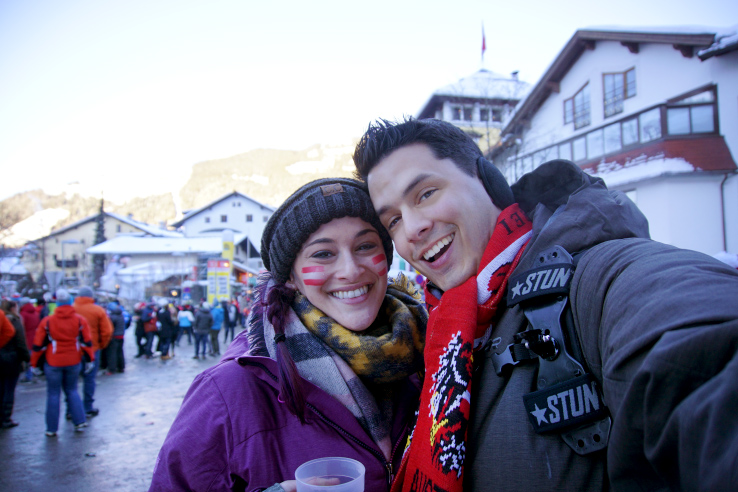 After we embraced the outdoors, we found a café and ordered some more Gluhwein, hot chocolate with rum and a bowl of delicious gulasch soup. This was HEAVEN!

We chatted with fellow Austrians, a few Canadians and found out that we were pretty lucky to have just walked into this situation with absolutely no knowledge that it existed. People were here from all over the world. Most planned their trips months, even a year in advance, and we just drove right up to the fun! 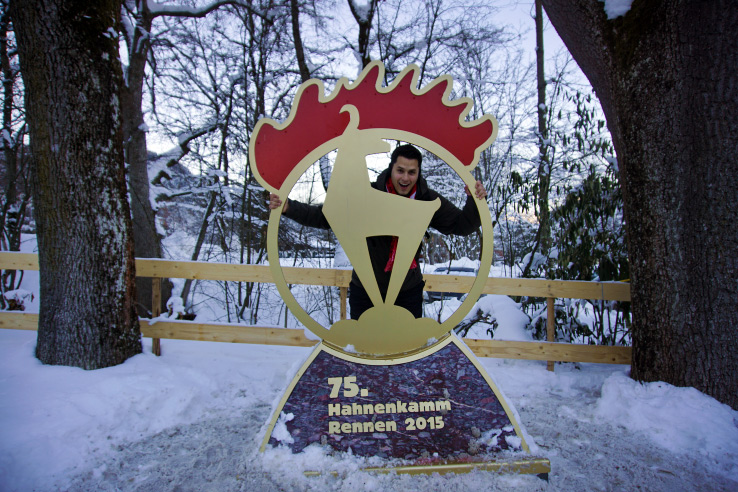 The ceremony was set to take place at 6:30 pm. We found the best place to watch about an hour before, by total luck, of course, sat down and waited. We had front row seats, so were not planning to move an inch, no matter how early we were!

One by one they called the winners out. From 5th place to 1st, with France, France, and Italy taking 1st through 3rd place. 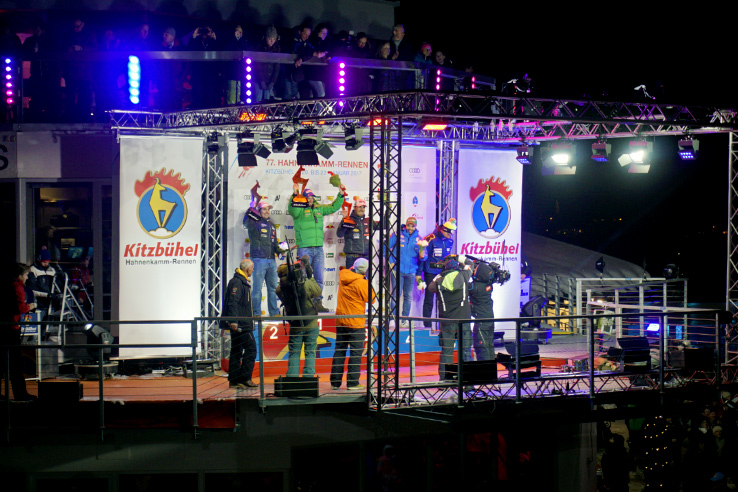 And just as they finished, we looked behind us only to see a massive FIREWORKS show begin! The fireworks were fantastic and went on for a good 20 minutes! They were accompanied by music too, adding to the festive spirit of the occasion. 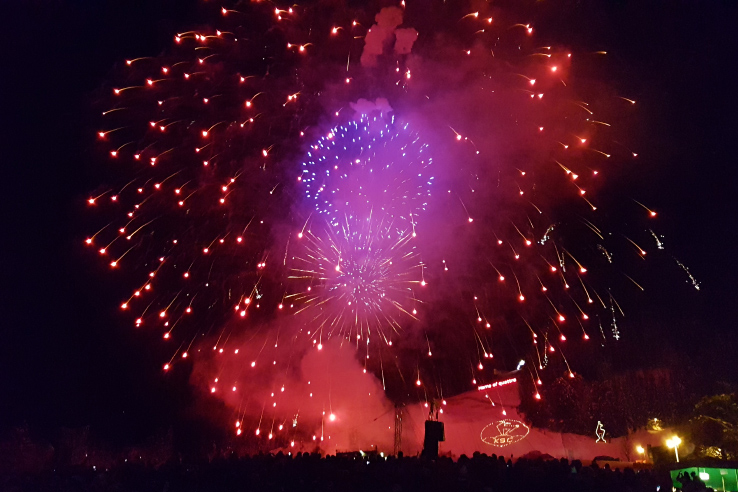 You know life is good when… you find yourself watching fireworks as you’re hanging out on a ski slope in Austria!

Being spontaneous at Kitzbuhel, for the WIN. 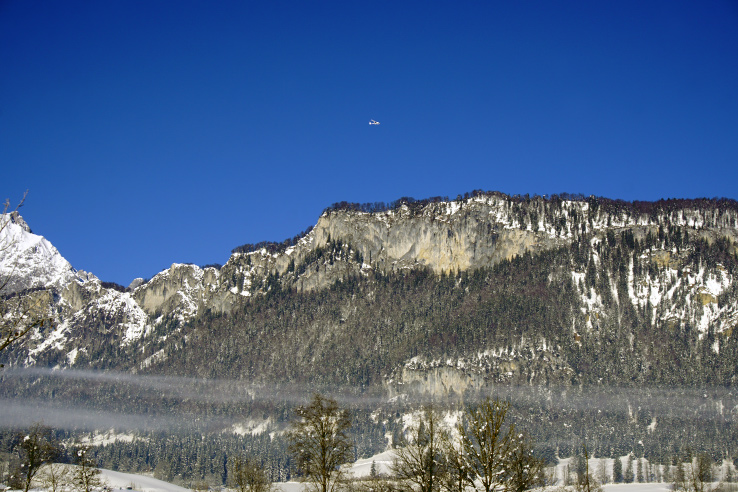 Our day at Kitzbuhel was in no way what we thought we were getting ourselves into. It was WAY beyond that!

Randomly stumbling upon the Hahnenkamm World Cup was a breath a fresh air. A much-needed relief from the stress we’ve experienced lately, with the most perfect timing. 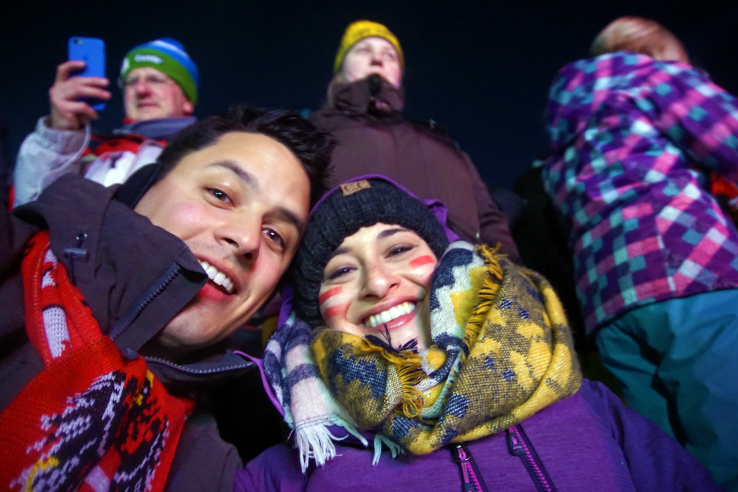 Sure we didn’t end up going skiing. We could have turned around when we hit TONS of traffic or when we got there and realized that our need to ski was not going to happen that day. But we didn’t.

We went with it, embraced every minute of it (even with face paint) and now we have a new story to share, an unexpected check off our bucket lists. A new life experience that we’ll remember for the rest of our lives. 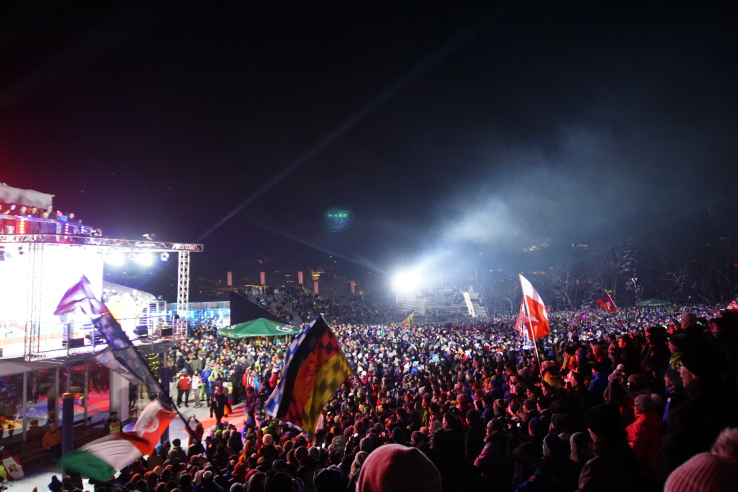 The Hahnenkamm races take place every year in Kitzbuhel, Austria around the middle/end of January. For more details, visit the official Hahnenkamm website.

Watch our ENTIRE day at Kitzbuhel through SnapChat: